Departing Lechine to go the very few miles to Montreal was an ordeal of navigating shallow water in a circuitous route. In British Columbia (BC – where most of this crew was born) the water is deep and cold. Going from point A to point B is a straight line with no worry about depth. Almost this entire trip we have had to worry about depth. Many of the lake in BC are deeper than the real ocean waters we have crossed.  To get from A to B here there may be a hundred buoys to navigate around.

The next impediment to navigation today was that the two locks we need to traverse were only open two times today. We made it to the Cote Ste Catherine Lock. We had to wait for two ships so Mark and Stephanie had their smoked meat sandwiches.  Our French Canadian Sea Ray from yesterday was back at the lock with us and so we rafted together again for these two locks. We had to wait for the Kaministiqua at the St. Lambert Lock.

On the way into and out of Montreal, we saw the building of a new, impressive, and clearly expensive Champlain Bridge into Montreal. It looks like Star Trek Voyager would be simpler and cheaper to build. 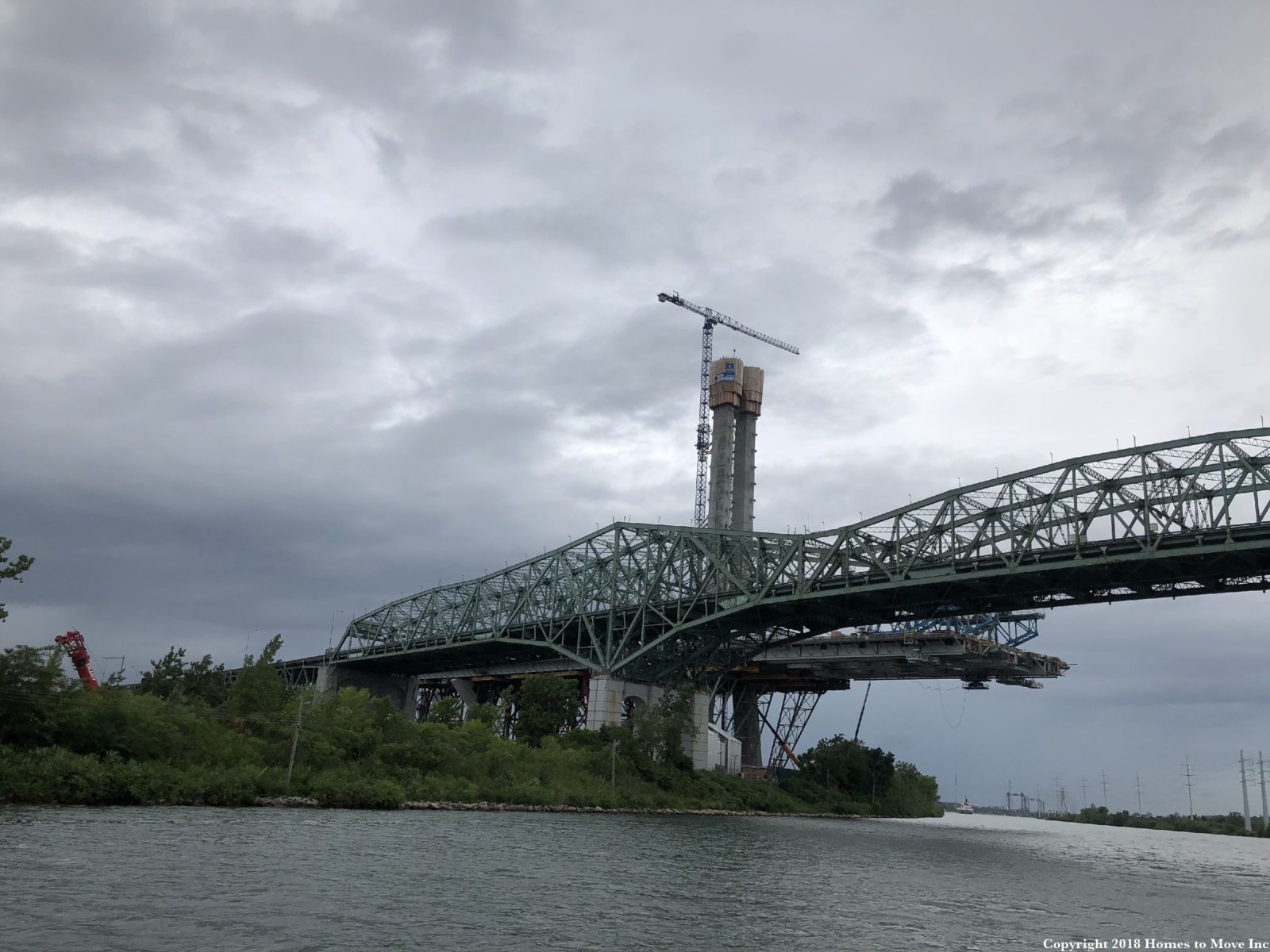 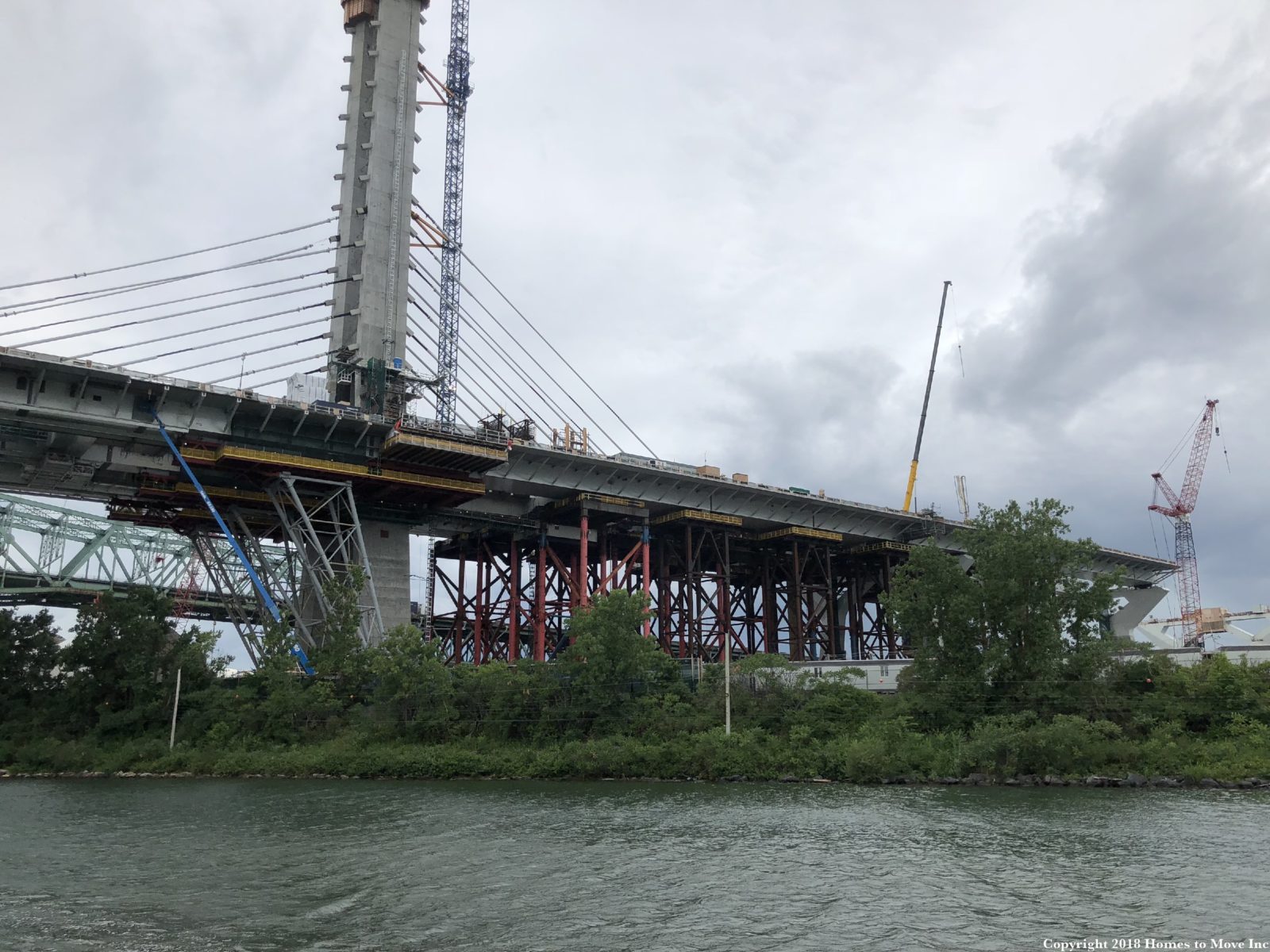 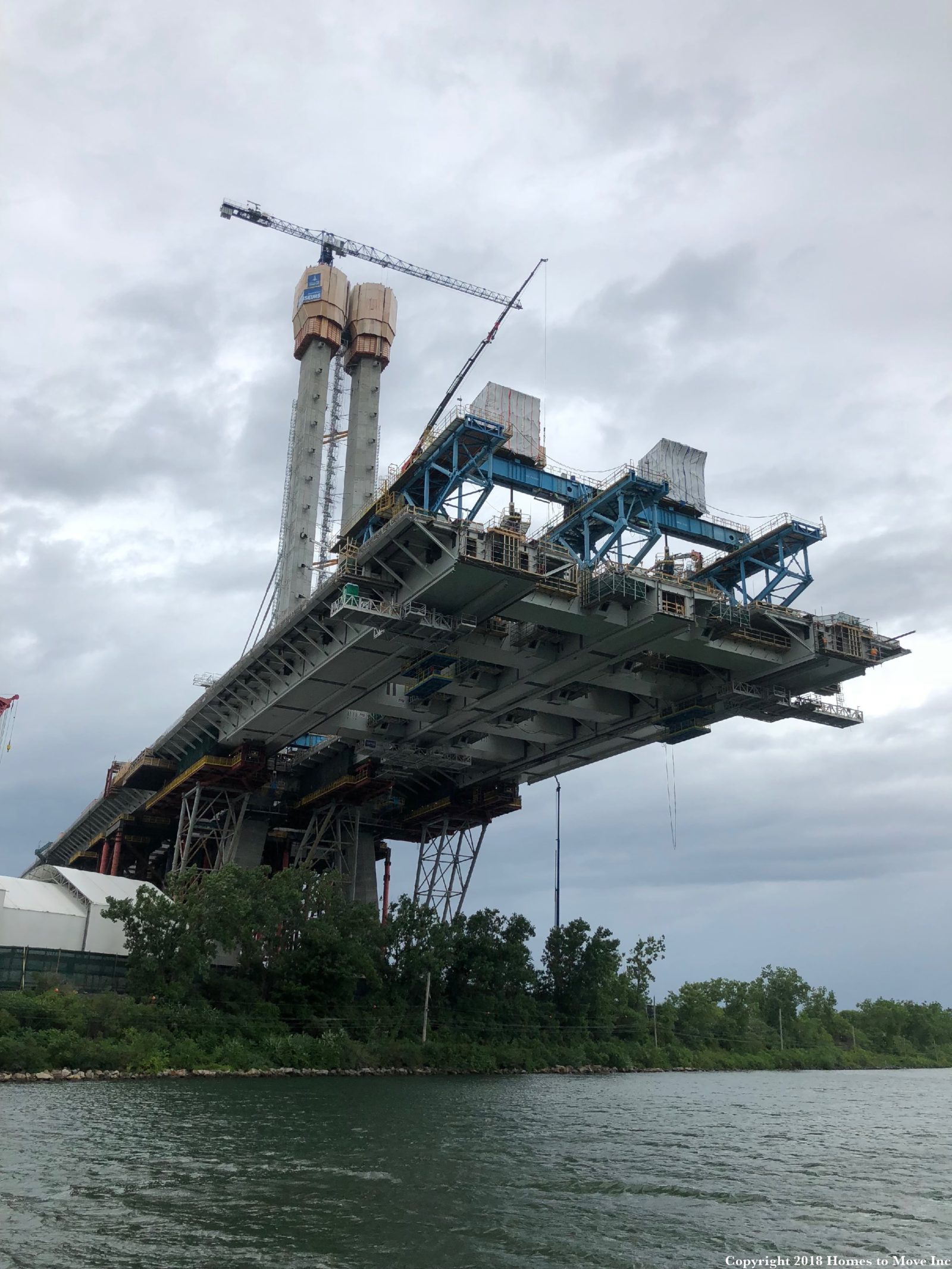 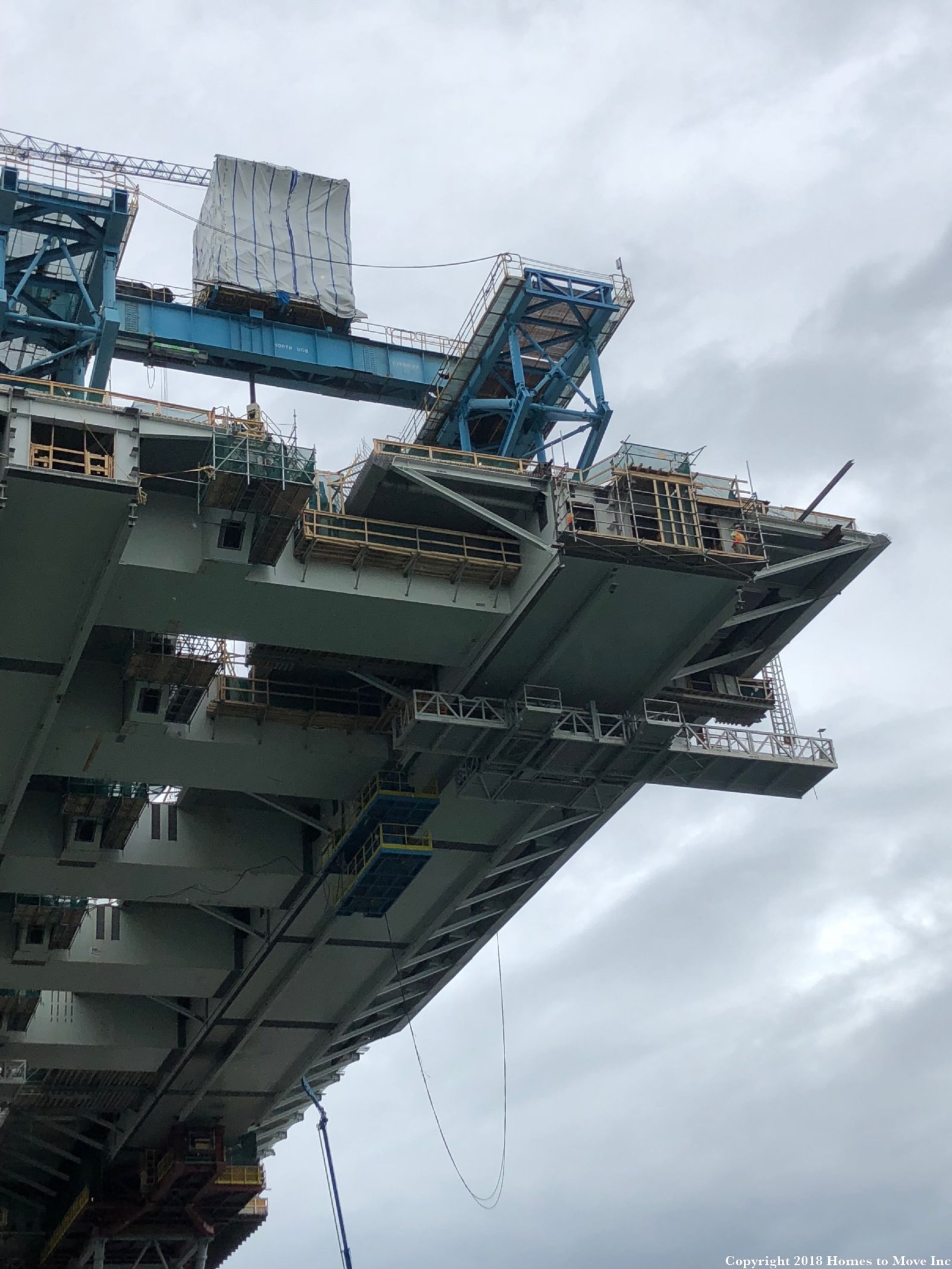 At 17:05 it started to pounding rain. There is a constant and strong 6 knot current the would defeat most sailboats and almost all trawlers from ever turning the corner and making it up the 2 km to the Montreal Yacht Club. Currie fought the current to the entrance to the Yacht Club (which we barely found) and then did a masterful job of navigating Cherish into a tight slip in the awful rain. In retrospect, we should not have tried to dock in that weather but Mark is a natural at this.  One could barely see a freighter until they were 50m away. 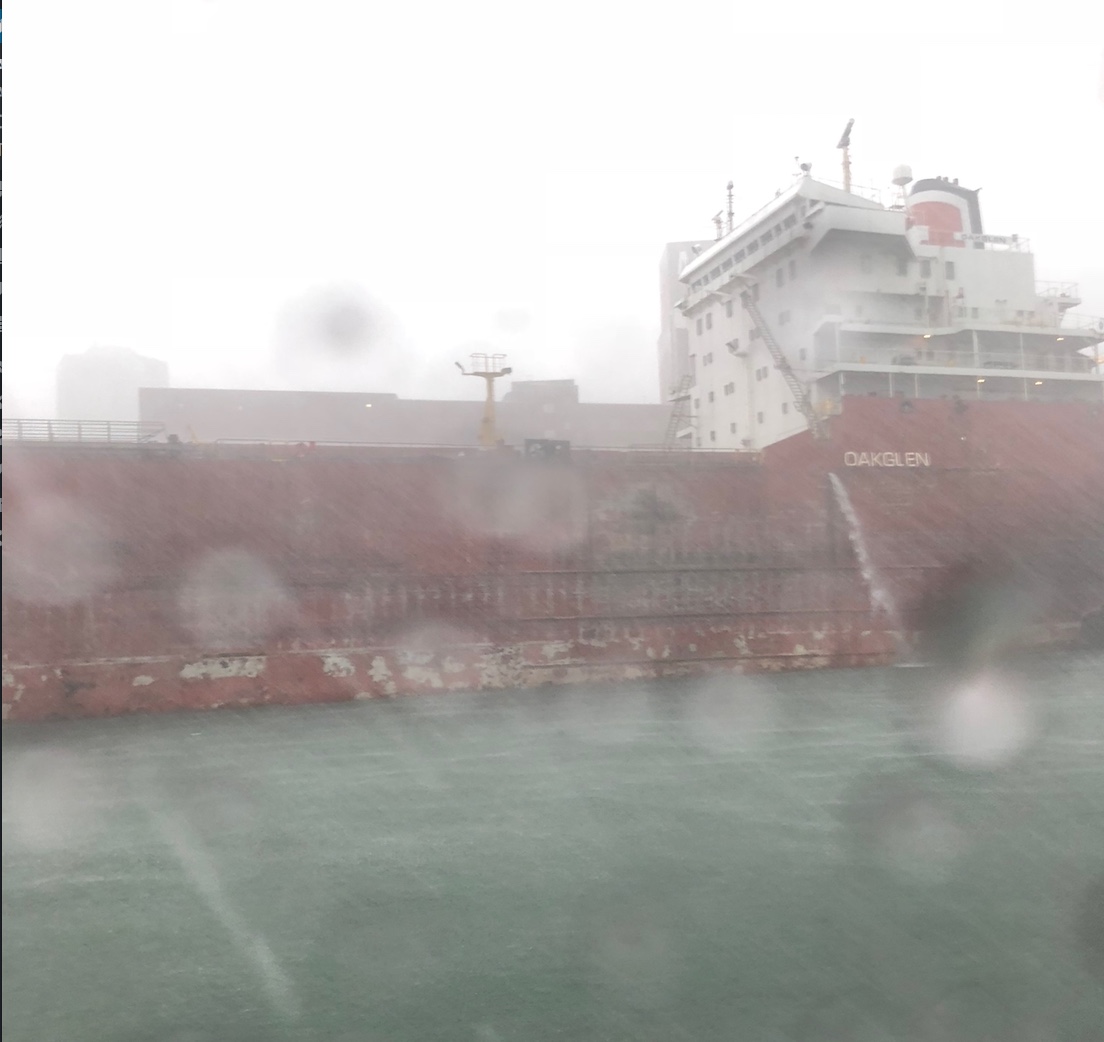 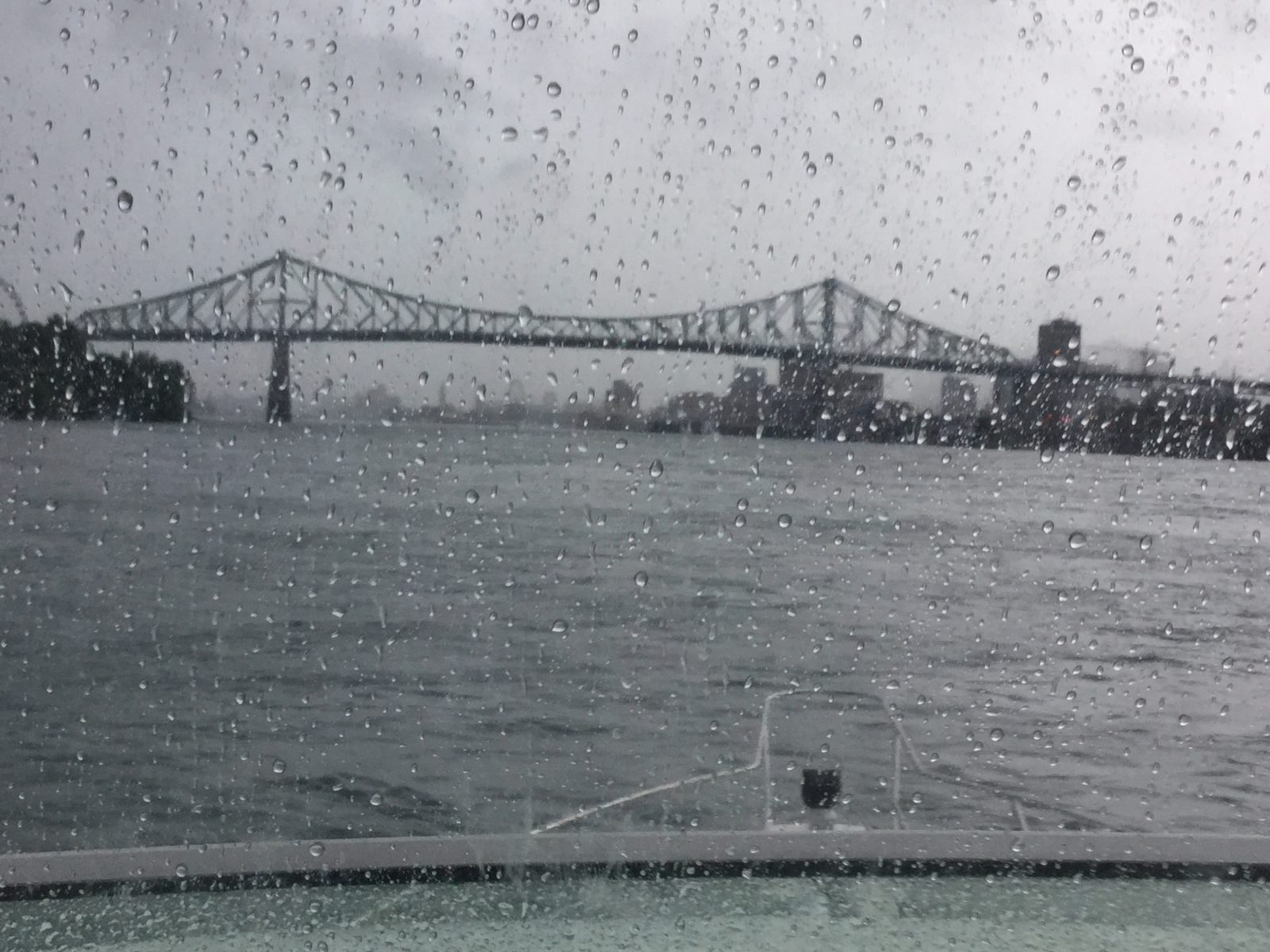 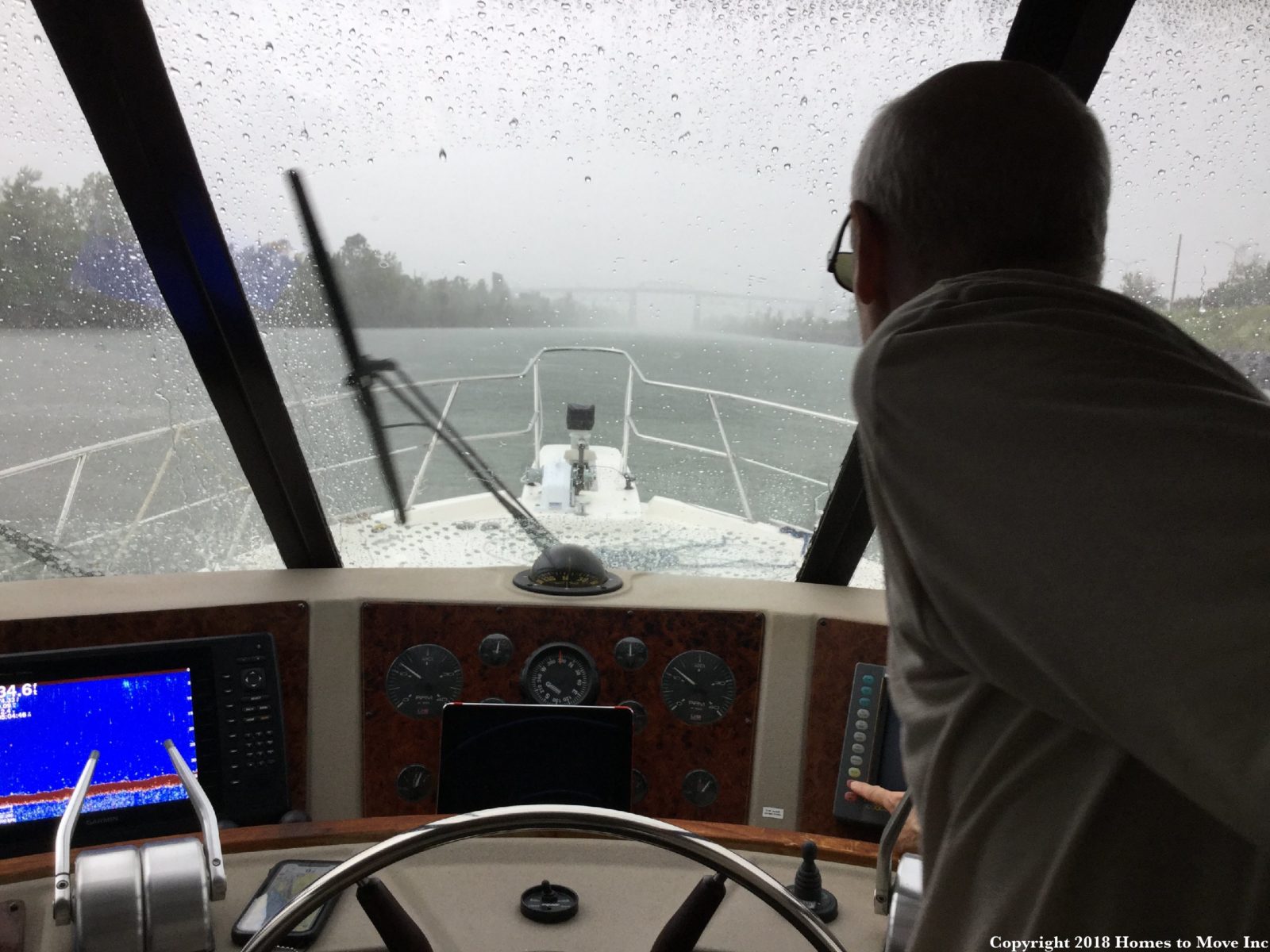 We got the Great Loopers discount and the place was end-to-end great! They even lent us their Club minivan to go to the Montreal airport to pick up eldest Boyle brother Patrick and Mark’s wife Debra.

Some of the boat in the marina. From 1932 Theodore to the modern tug that is well named for the stretch of water that one has navigate in order to get into the marina. 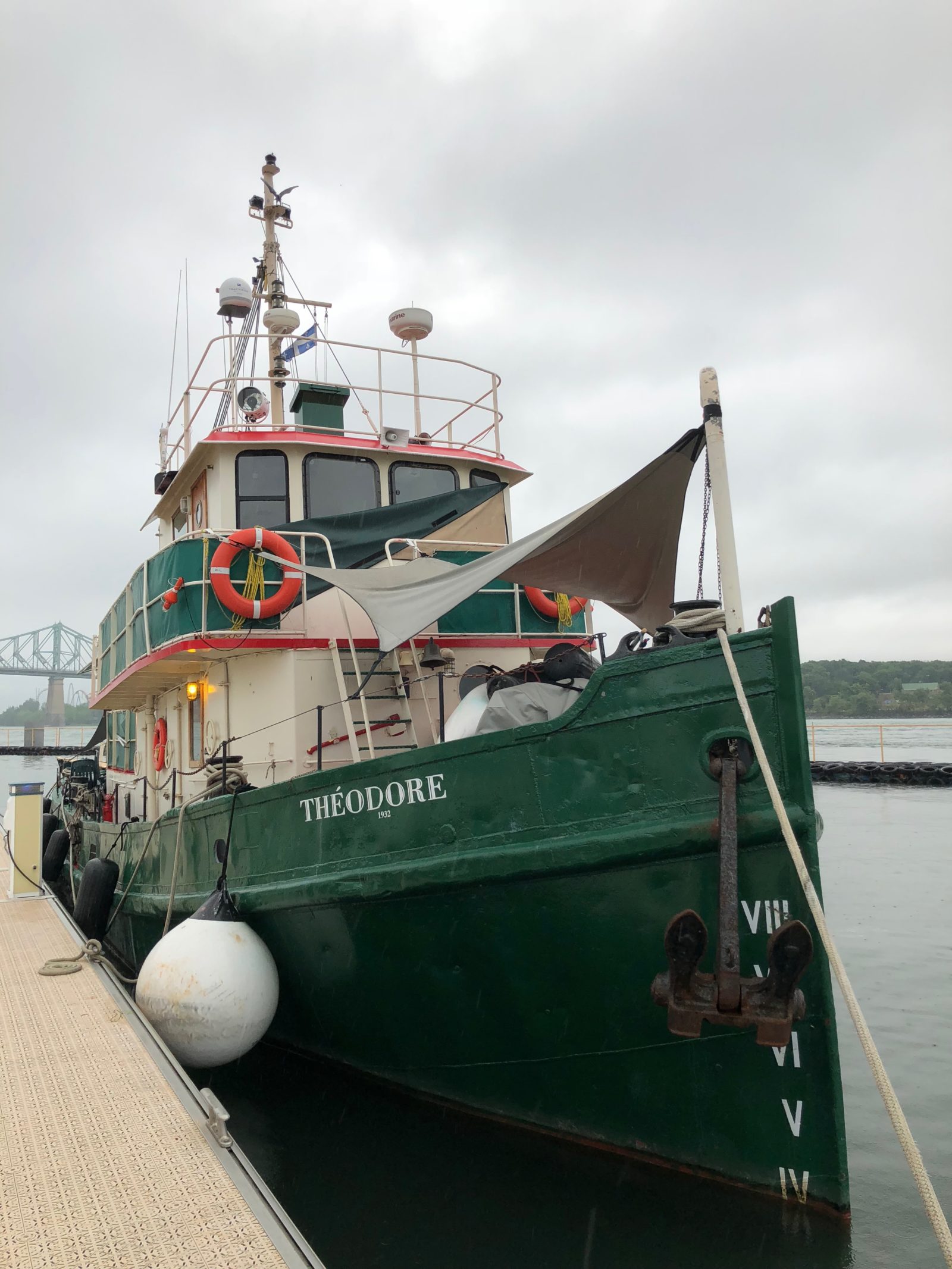 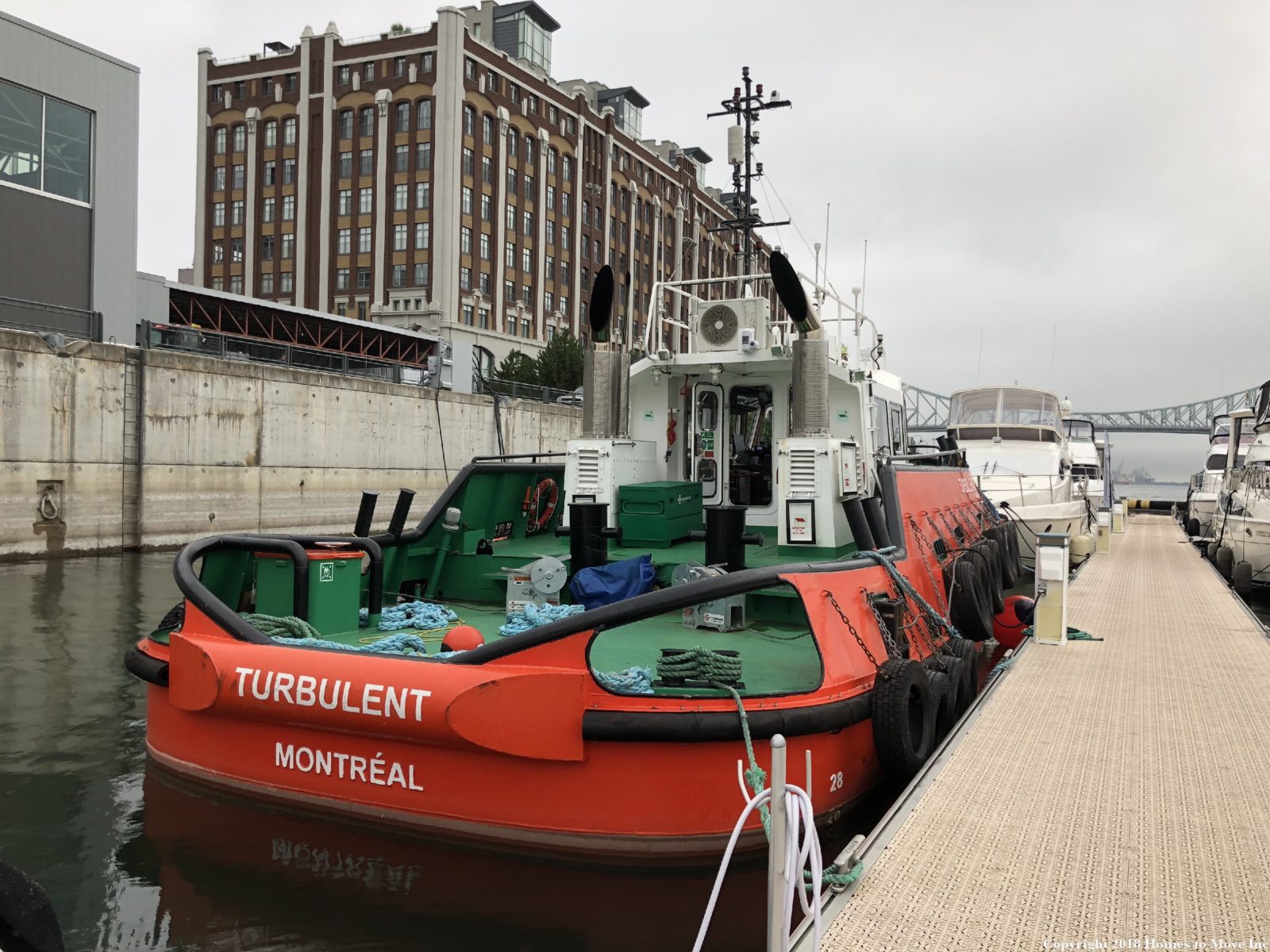 Debra arrived first and Pat’s plane was late. We dropped Stephanie and Debra off at the IGA for provisions including wine which we had none of and then started our looping of the airport to find Patrick.  We returned their minivan at 9:04 pm, just four minutes late for their closing. The details of the quick trip back from the airport to close the time gap caused by Patrick’s plane being late remained a mystery.

All in all Mark, Stephanie, and Currie traveled about the same duration as Patrick and Debra. However, they flew coast to coast from San Franciso and Vancouver. We went roughly 30 km.

The following day, clearly, boating sleeps worked out well for Pat and Deb as they slept until 10 am. They would say West coast time but they went to sleep at the same time as Mark and Currie who were up at 6:30 am. Once they had breakfast we walked down Rue de la Commun Quest.

Introducing on the left Debra Boyle and on the right Patrick Boyle. They will be in leading roles in Act II of our play. Of course, five people on a small boat made for new dynamics and changes the team dynamics that had been established in Act I and we are adapting. Patrick is a Canadian but longtime US residents missing his Cheezies and Shreddies. Here Patrick is holding a bag of Cheezies that Stephanie will have purchased for him and more to take home to his family. We suspect that the advanced gastronomic palate of Montreal is not impressed by Patrick food faves. Mark made sure Patrick had Shreddies available for his first breakfast. 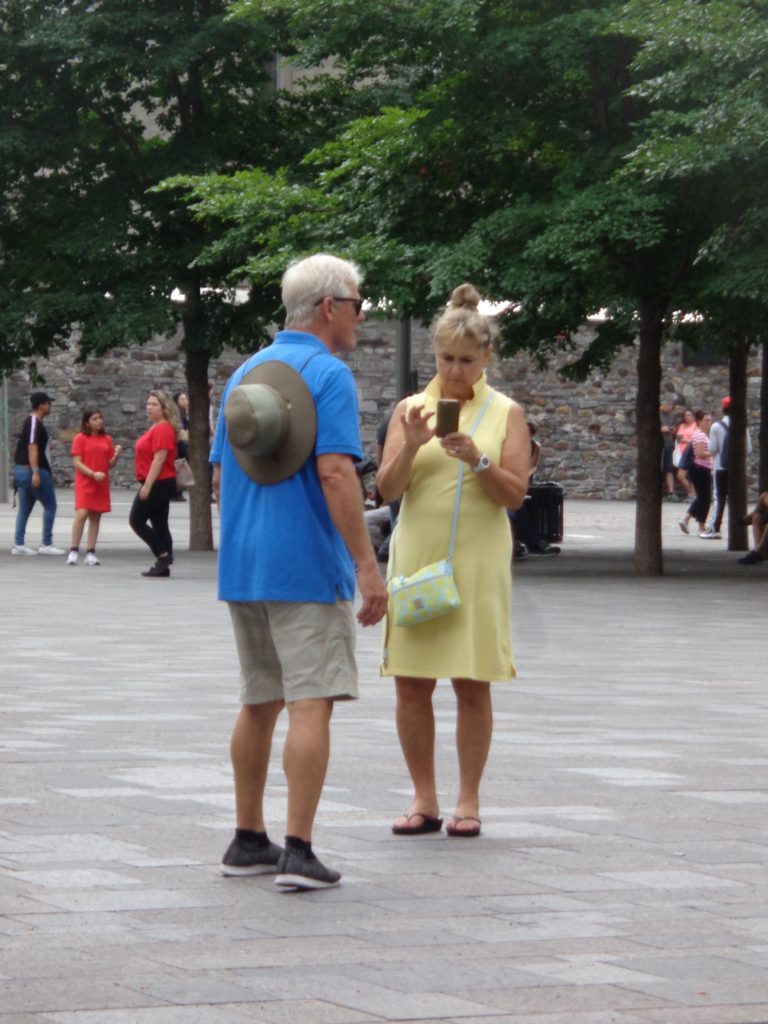 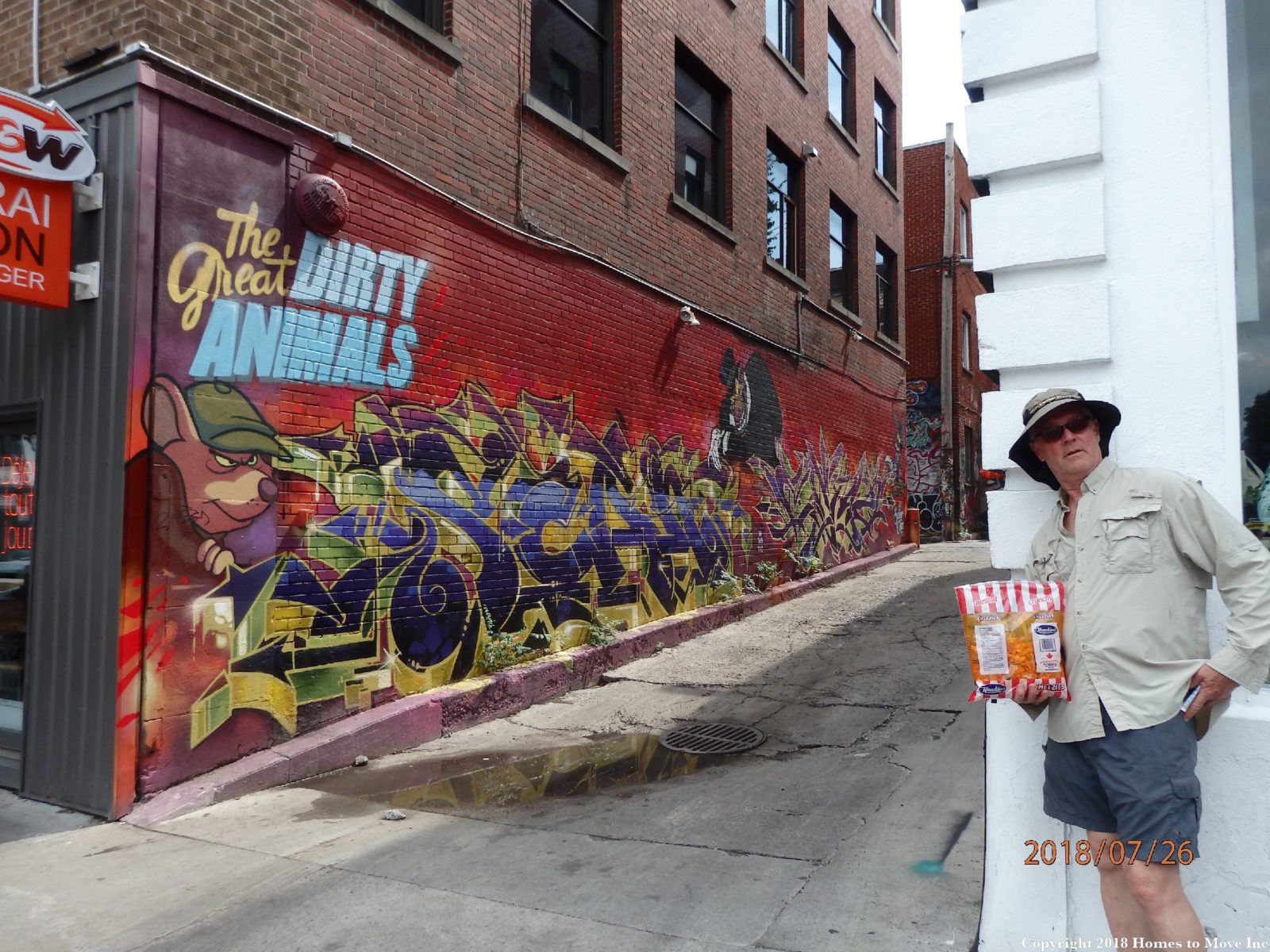 Then up Place Jacques Cartier. on the way to Notre Dame Basilica. Stephanie, Pat, and Currie went to China town to get some fresh baking and it was great. We brought back both sweet and savory baking for the gang. 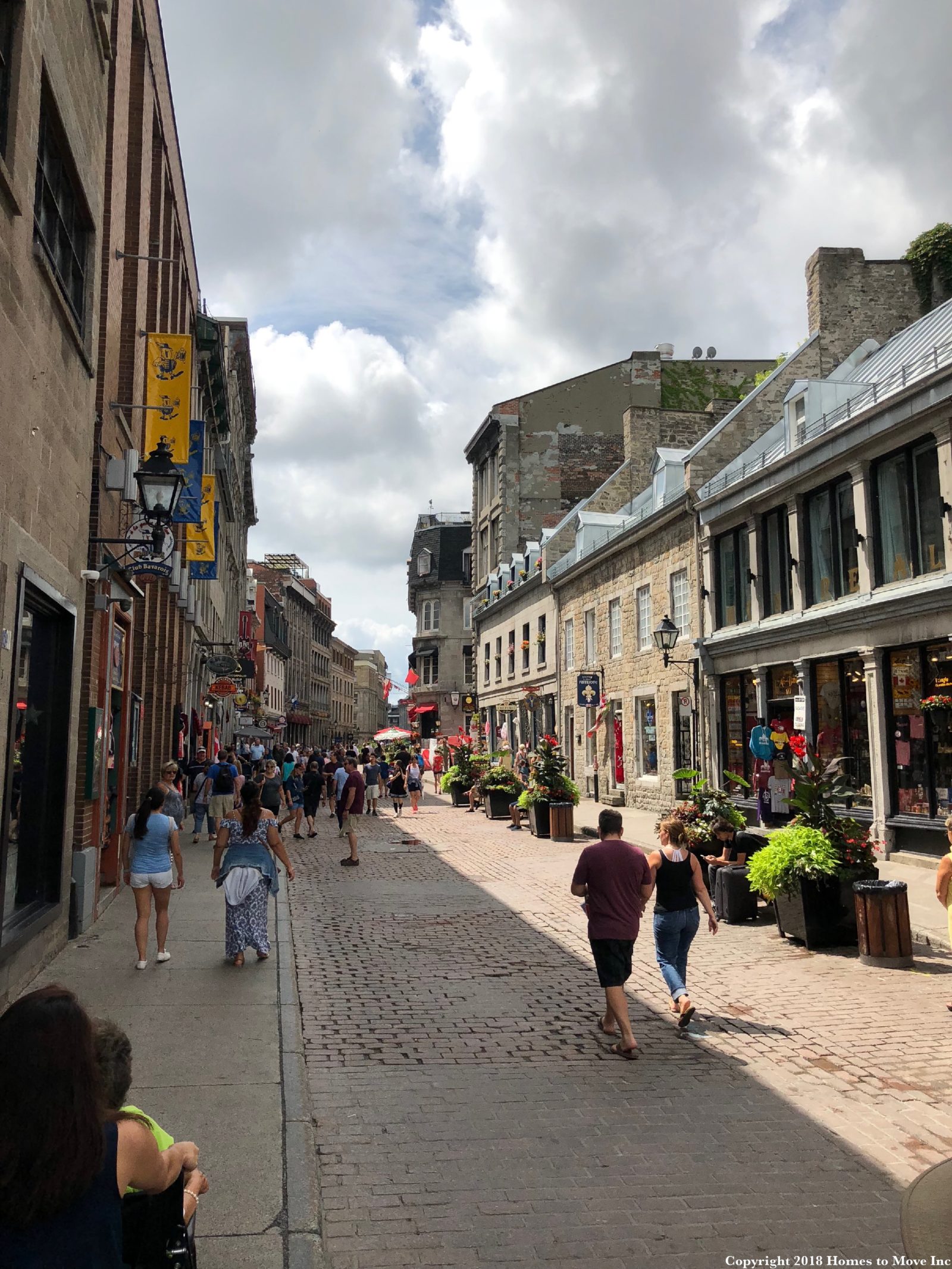 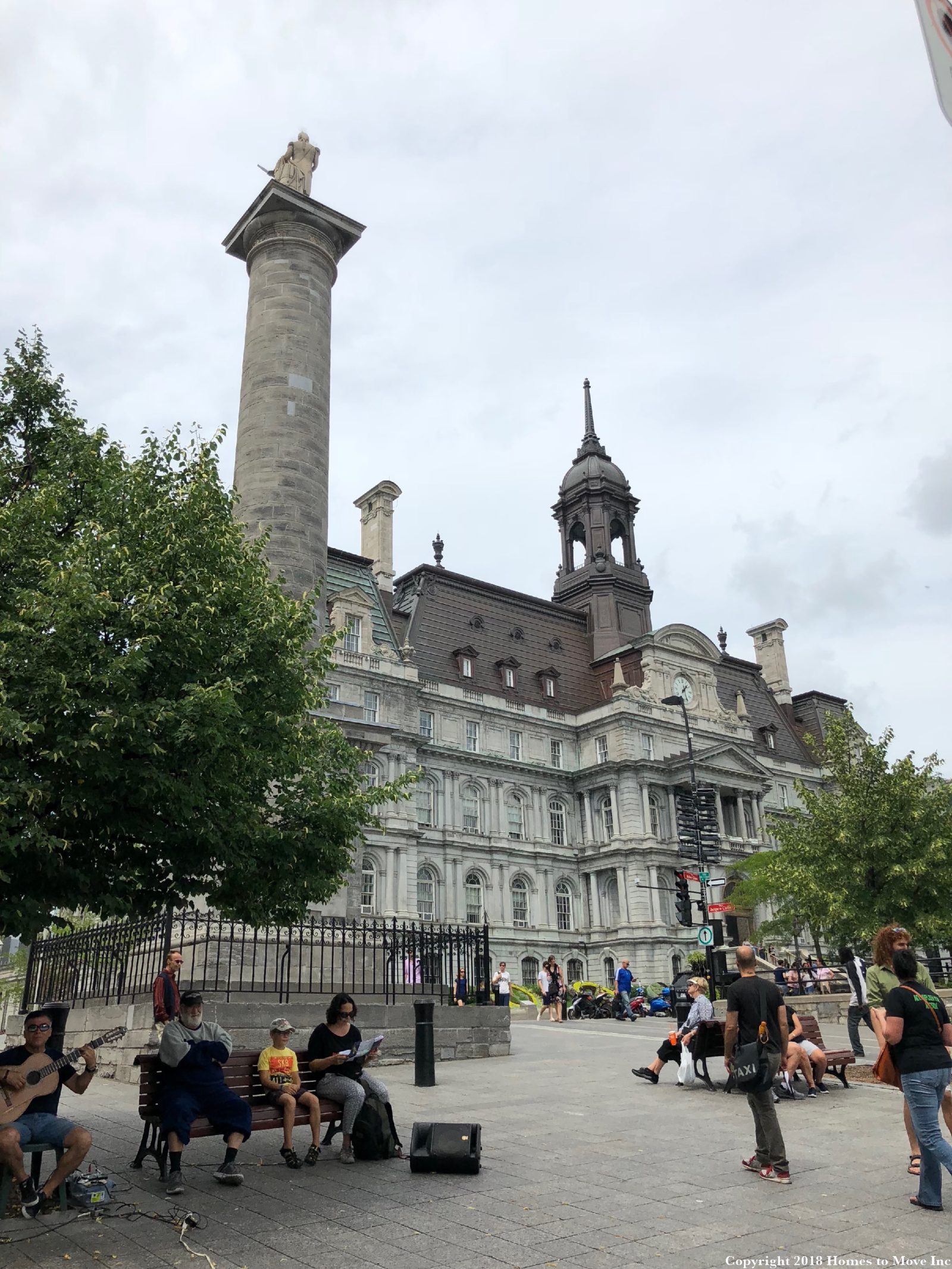 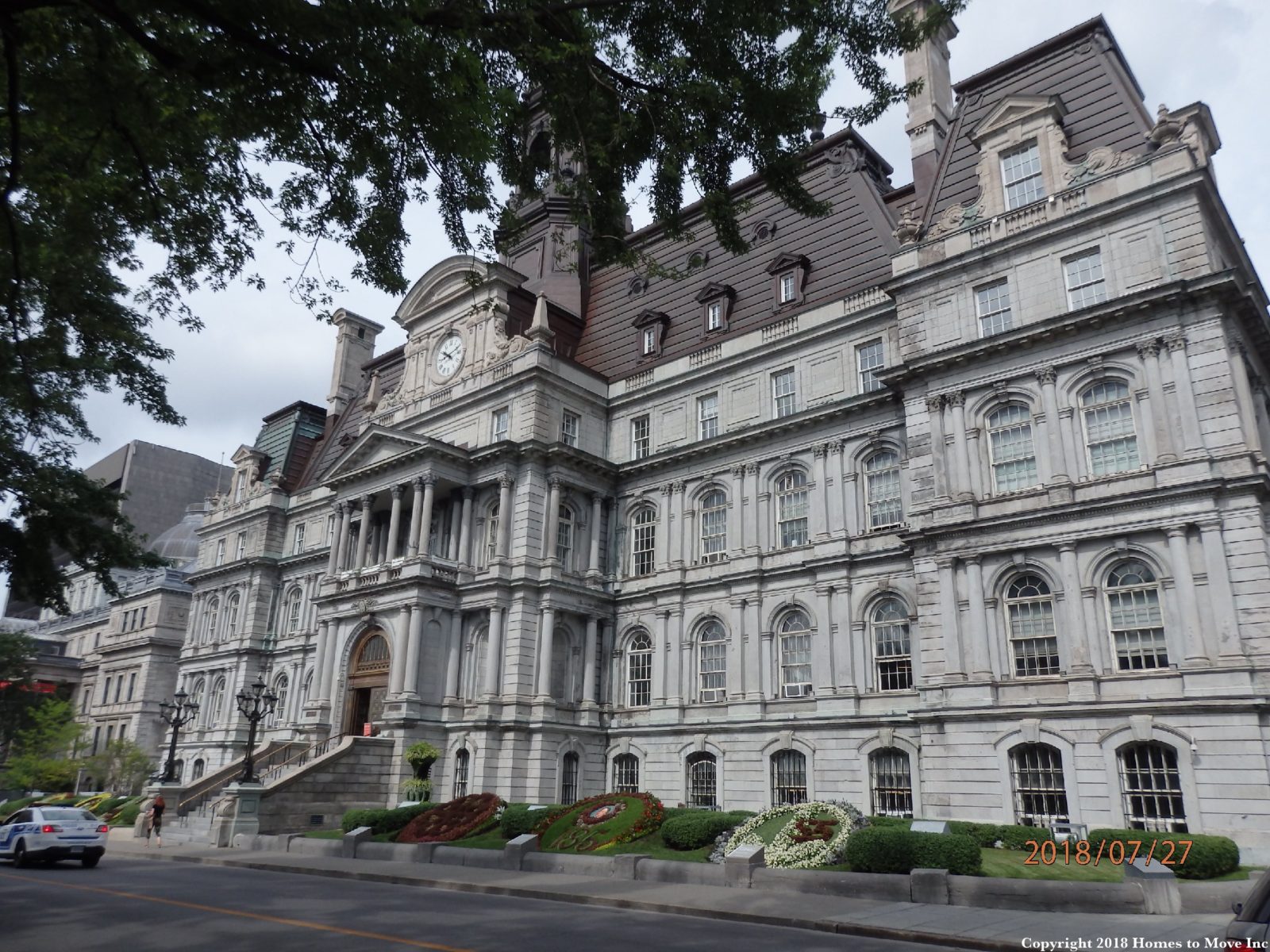 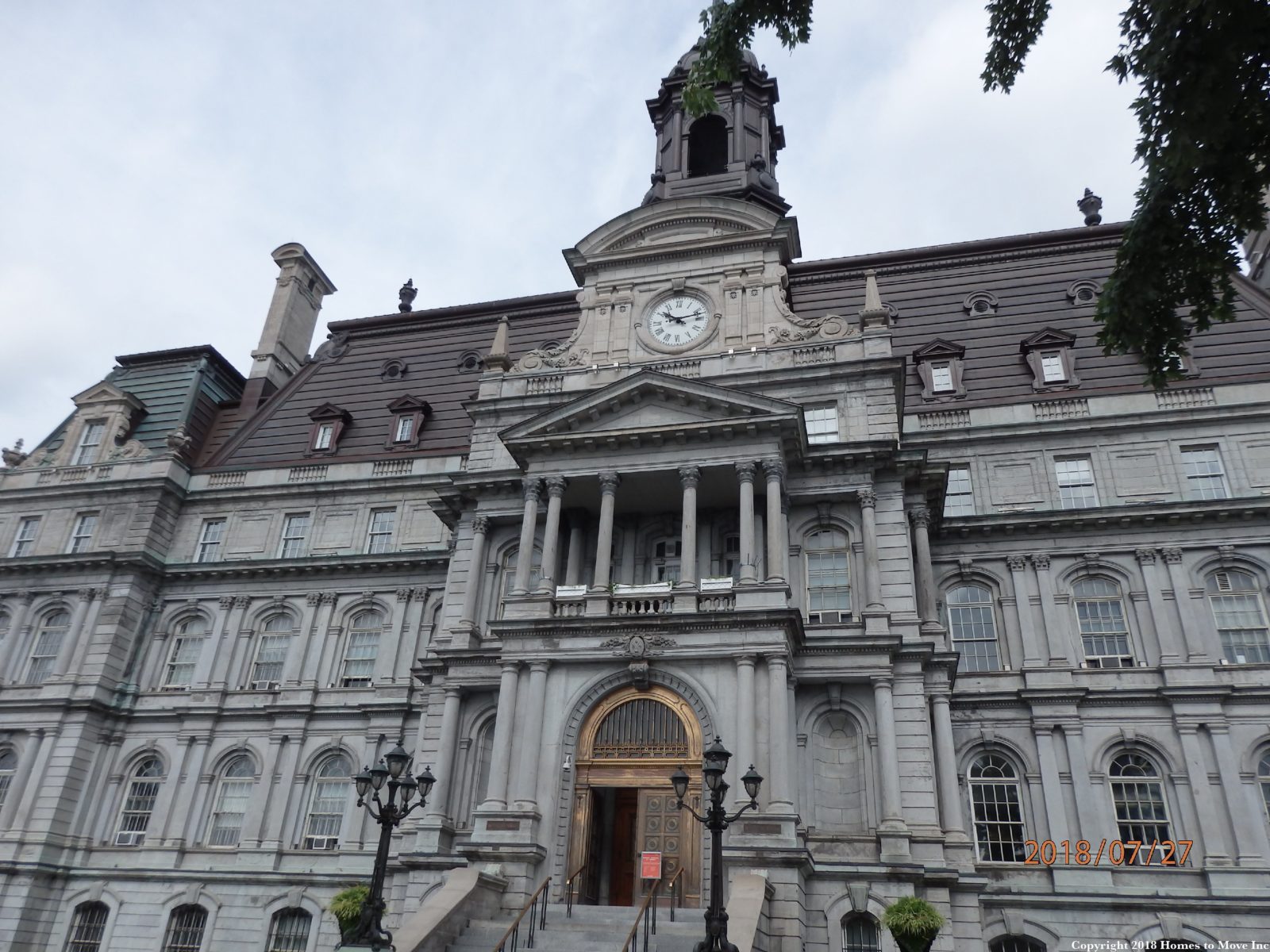 While not historical or culture these ducklings entertained us in the Marina during our stay. 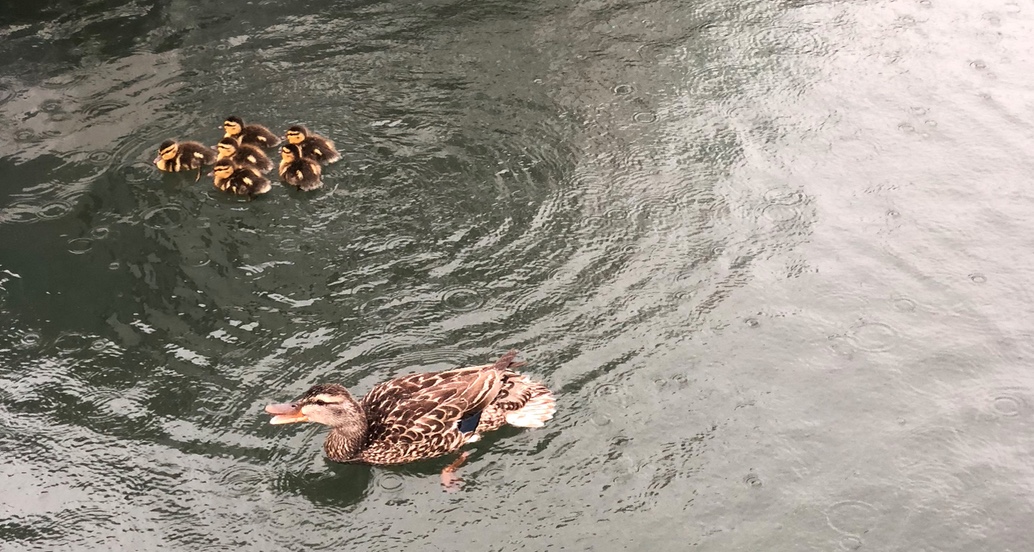 After more sightseeing, the lure of Montreal Smoked Meat got to all of the group but Currie.  Not sure how Currie ended up paying for the Uber as he should have been a conscientious objector. The tourist bureau had said Schwartz Deli but the line up was huge. The tourist bureau also said if the line long just goes across the street to Main Deli & Steakhouse, which we did. The meat consumers were happy.  Walking back we saw more of Montreal’s modern style. 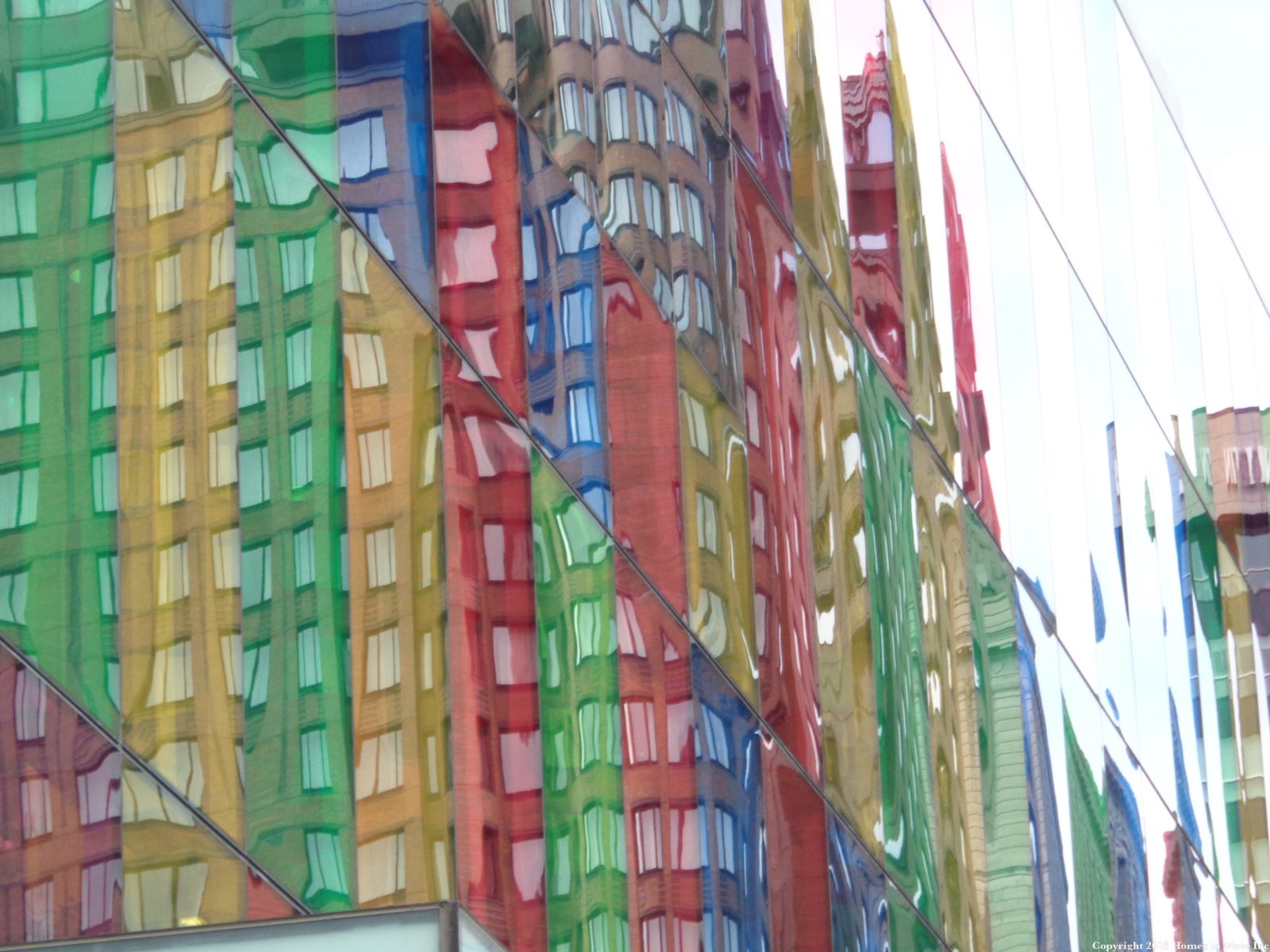 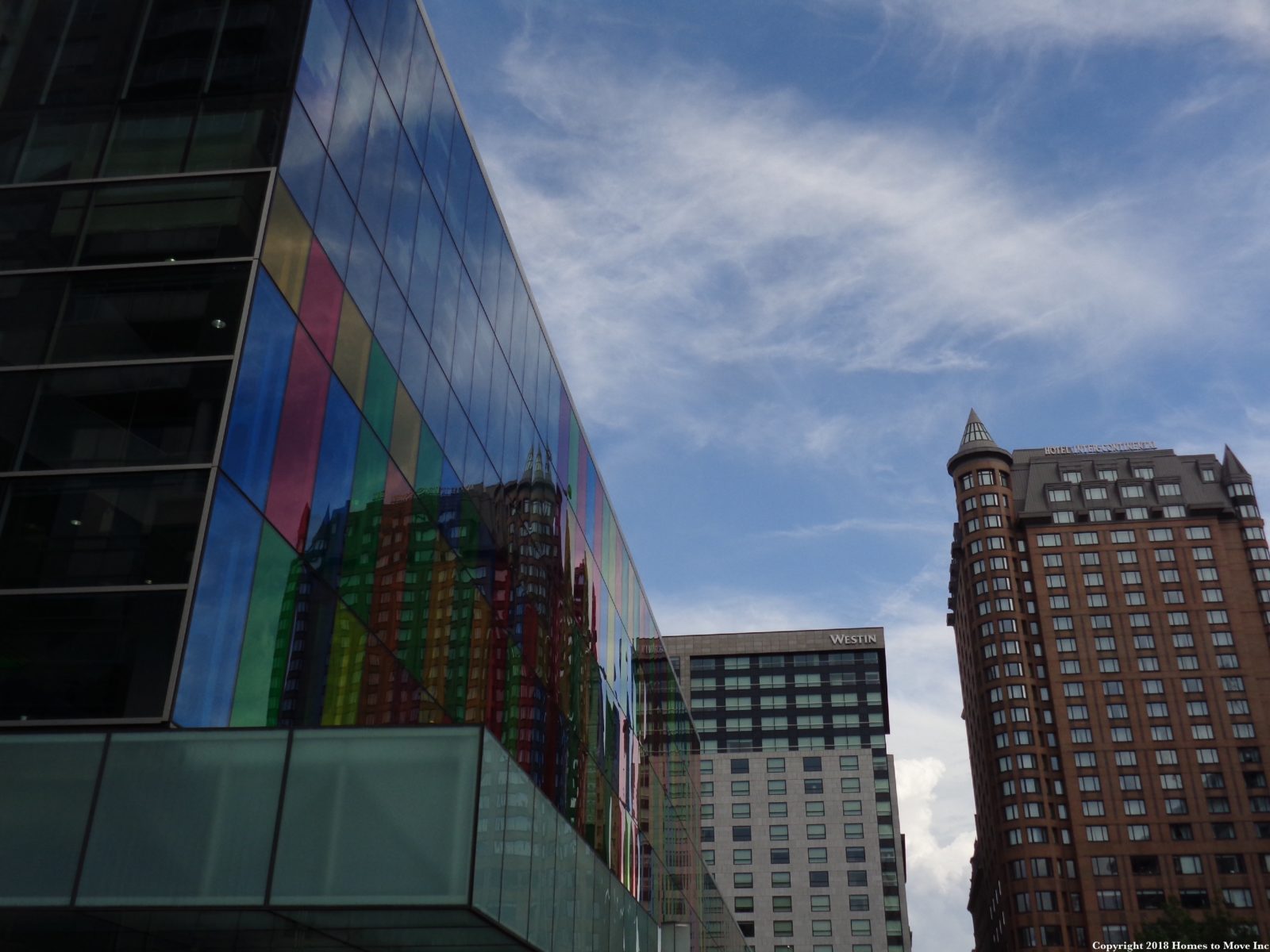 We walked back to the boat via a good visit to the museum of Chateau Ramezay including their garden. Not many places in Canada can reflect 500 years of history. Currie in the garden taking pictures and a happy bee. 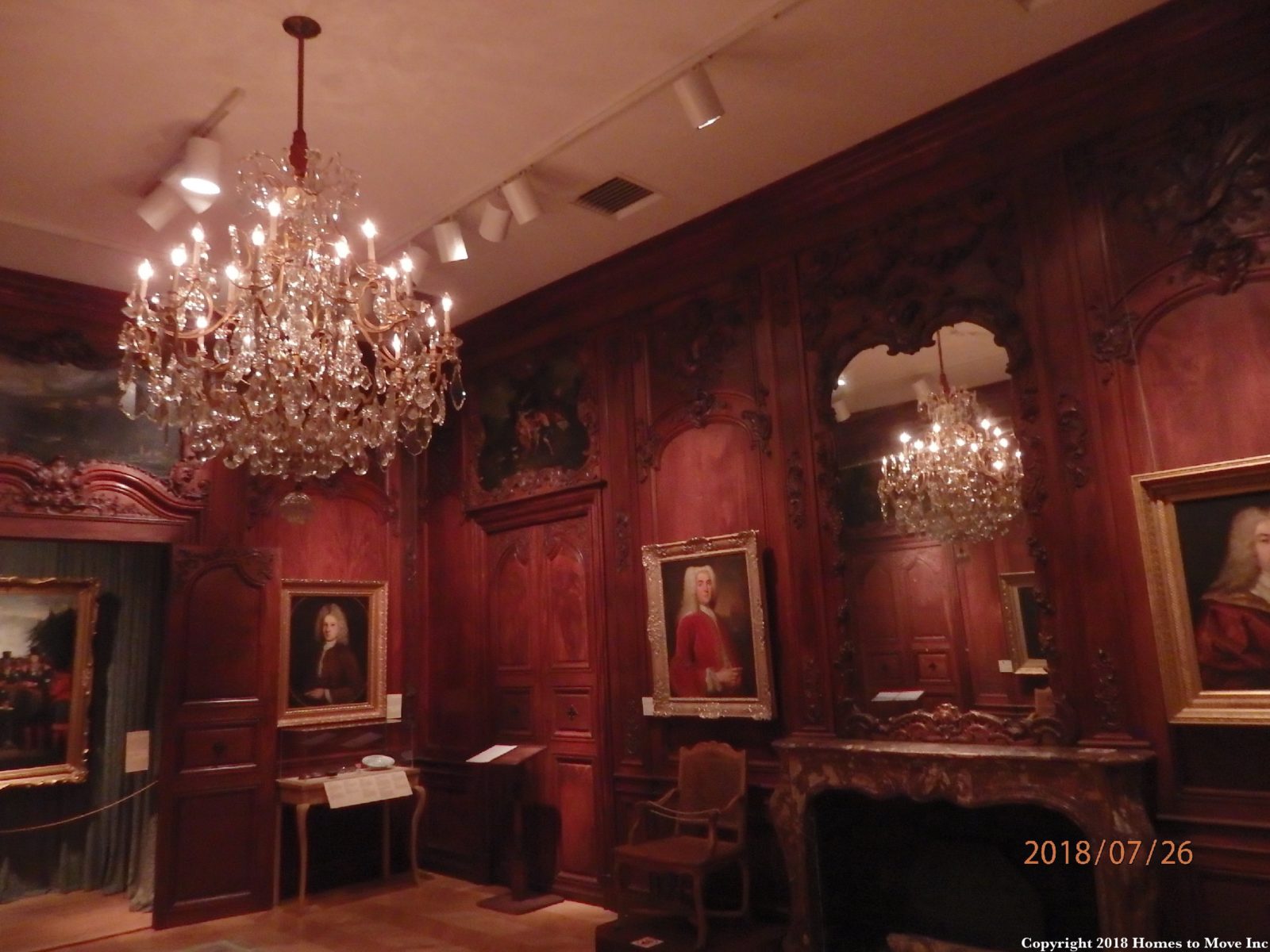 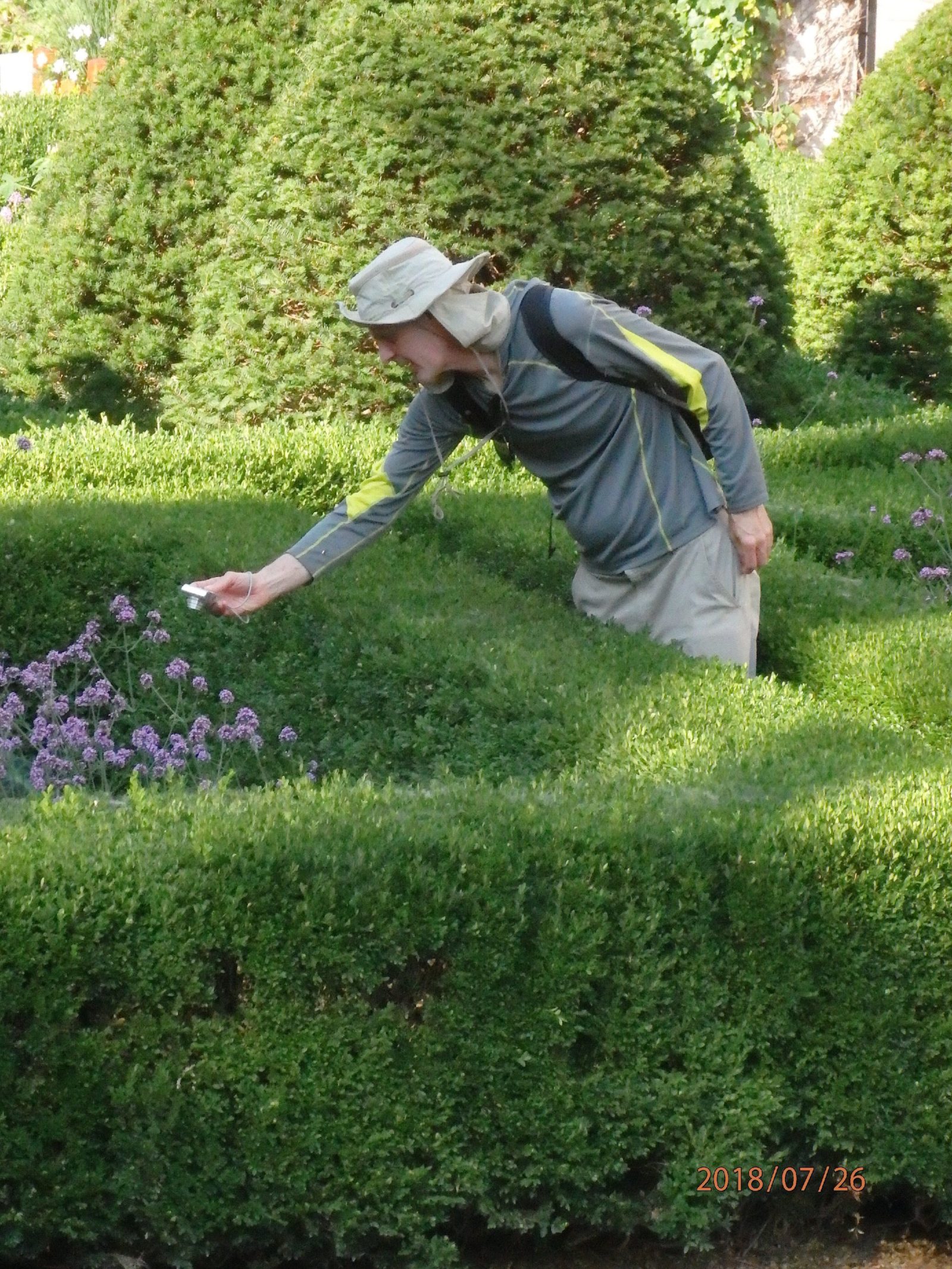 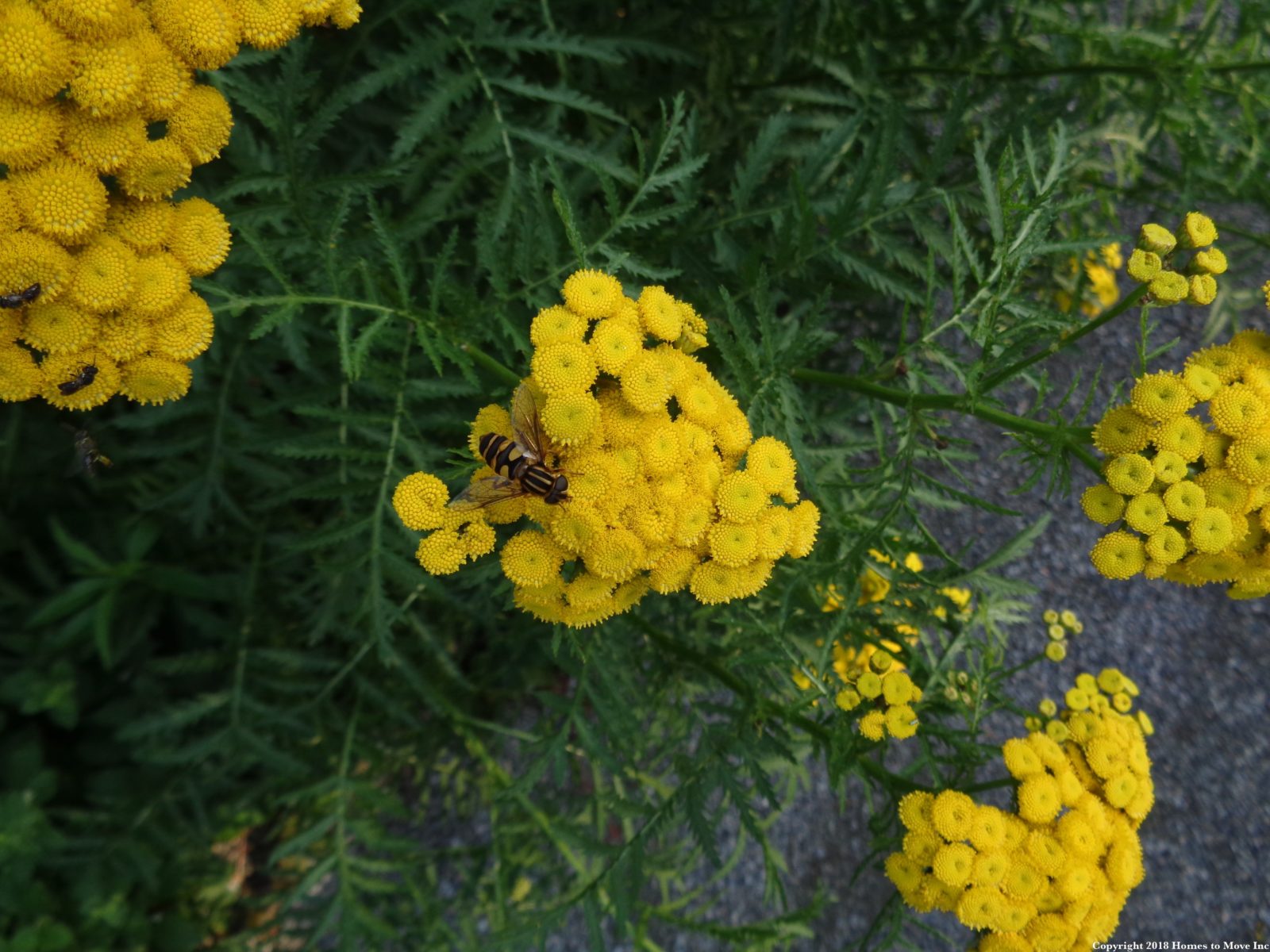 About 9 pm Mark, Debra, and Pat walked back into Place Jacques Cartier for a final visit. This is Stephanie’s picture of Montreal at night. All the pictures in this blog, with dates in the bottom right, are attributed to Stephanie. In a particularly fun way, they project ghostly figures on the Sailor’s Memorial Clock Tower. The image on the right is the black clock tower with moving shapes drifting up and around. 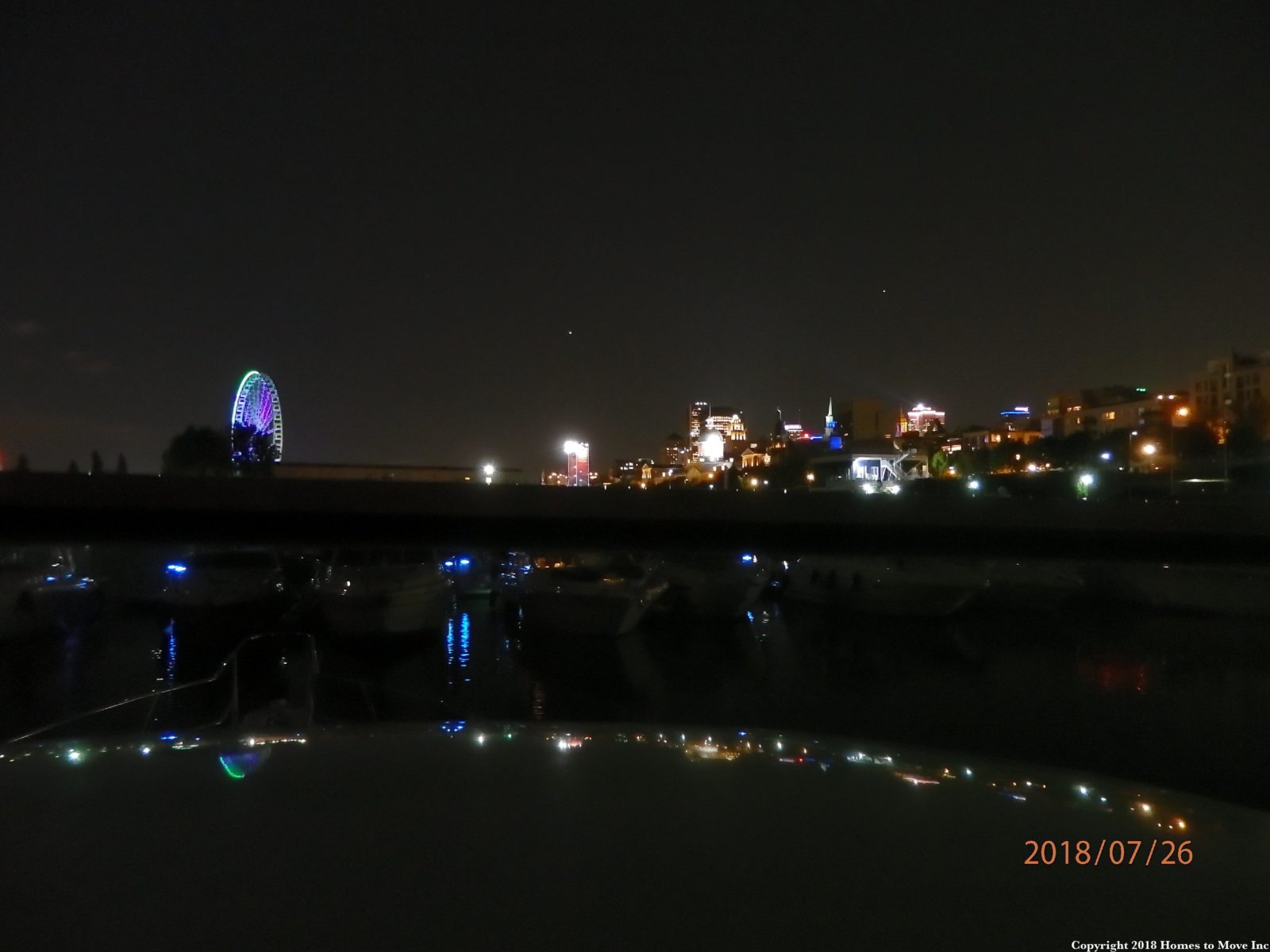