Mark and Currie got spoiled into thinking of being able to swim every day. It turns out that we were the only ones swimming in the Erie Canal… but it was still great. Mark noted swim’s itch from this on this swim 16th, therefore, we cut back on our swims… which is the second best physical part of boating. Fitz is the best part. Water temperature being 85.85 degrees. 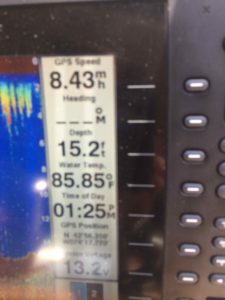 As noted earlier, there are lots of old equipment maintaining the canals. The last picture is Cherish against the lock 15 wall. The last picture on the top row is one of the old generators in the house on Lock 15. Love old and likely still working equipment. 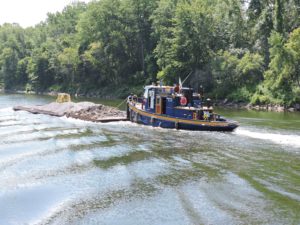 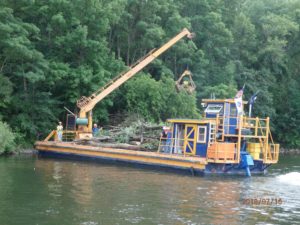 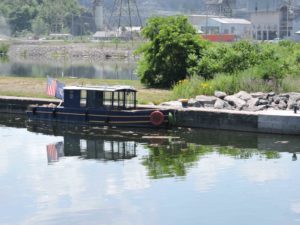 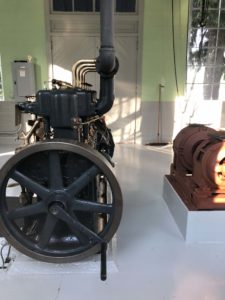 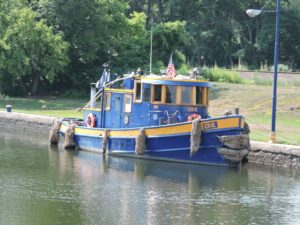 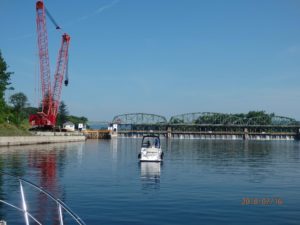 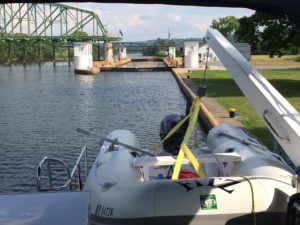 At lock 15 on the Erie, the lockmaster was great and we were allowed tie up by the lock and even get a shore power connection. It started to rain and two poor bicyclists stayed in the park beside the lock. Every lock has an associated free State Parks so people roll into them in boat, cars, bikes. etc. Most of us have lived  “low impact camping” camping life from hiking, bike or motorcycle, in the rain and you know the story. These two bicyclists were in mid-40s and opted for this option vs being kids who could afford more, regardless we understand how they felt.

6:15 am and already left. There are a couple of early risers but we aren’t going to bed at 2 am either so not a surprise. It was a rainy day and the lock opens at 7 am so we went off. Now at lock 16 and the only boat again at the lock.  We went through this tiny river (lock exit), holding our breath and hoping not to hit anything, We happened on the gem of Little Falls, NY.  There was a tiny guest dock (shown below on the right) snugged up against the river bank and so we stopped by. The fire brigade in a drill was busily shooting water over the river. The very kind Fire Chief came over to visit. We inquired about shopping and he apologized that the city bakery was closed in July.  He talked all about the town and noted that there is new investment in it. Pictures below from Little Falls, NY, including the mansion that needs investment. 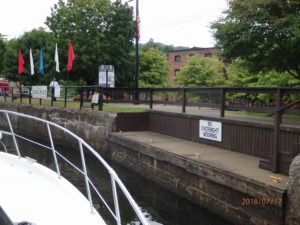 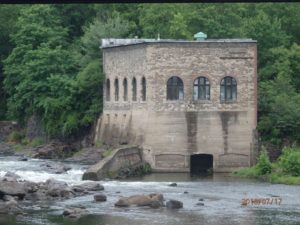 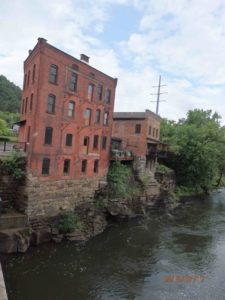 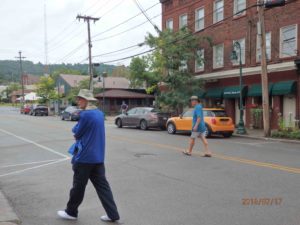 We had breakfast at Ann Street Restaurant & Deli great food, nice people. It seems we were the only locals. The Fire Chief eats there twice a week so much be good. Then we walked around the town …including 3 km to the Ace Hardware to buy a screen for the homemade bug screens for the boat, made by Mark. There are even Churches for sale. Churches with slate roofs and 1/3 of a city block long. They have lovely old mansions from the prosperous textile days and those houses needed serious investment to halt their decade. When walking we stopped by to look in the real estate office and found lovely homes for at very affordable prices. Left image on the left is the Carriage House for the building on the right. 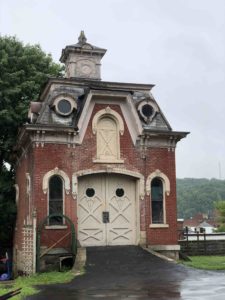 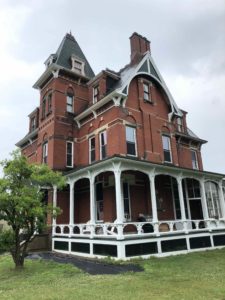 We bought things in the Dollar Store and just left them on the floor of the store until we could come them. Next, we needed to install a water filter on the boat for our drinking water. We had ordered in online, Peter Andrews was nice enough to accept the delivery and bring it to us, but “some assembly required”. We took the pieces to a George’s Lumber & Building Materials (shown below) about 300m from the boat dock local lumber yard who found and put all the pieces together so it was plug and play once we got it to the boat. It was a godsend for us, with limited tools. Small towns… got to lov’em. 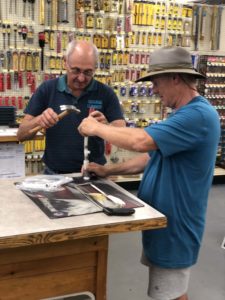 It seems one could find a great place to own and share, for less than years rent on a place in San Francisco or Vancouver.  We are sure that there are many of these towns, what Currie calls Post-Industrial places, on what Stephanie calls “on the edge” that is, the town may dwindle away or reinvigorate. It is sad when many of these towns look forward to things an Amazon Distribution Center (DC) as the answers as a savior … because DC jobs have benefits. Every town needs to create new value not just I make hamburgers for you and you dry clean my shirts but it is far easier said than done.

Currie is still catching up on the entries and right now it is early August, and right now alone at anchor and listening to Jimmy Buffet with a small glass of Drambuie. The particular Jimmy song does not matter as it is all good perspective on life, friends, family, the balance of trade, and in the end, what one can influence.  Mind you, it works just as well with most anything that comes up on song shuffle: Ed Bickert Jazz or Glenn Gould Goldberg Variations – 01 Aria or Elton John The Greatest Discovery (Live) or In the Bleak Mid-winter (mine was the Vancouver Cantata Singers but it isn’t on Youtube) just a bit of quiet, a song and a spirit or yearning.

1 thought on “Swimming every day as of July 16 at Fort Plain, NY and the morning of July 17th”